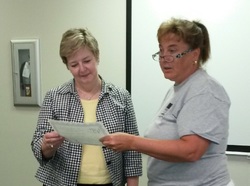 After the program President Marsha Abbott presented BPW awards received at the State Convention.  The club received the Pat Nixon Bettye Powell Award for the highest percentage of continuing members during the fiscal year.  Val Short was presented the Verna Taylor Membership Award for sponsoring the greatest number of new members during the year.  Val was also responsible for the club earning the State Nike Award for the best overall coordinated programming during 2014-15. Prior to adjournment, the club was pleased to welcome our newest member, Anita Hicks.

The Henderson BPW holds a dinner meeting every third Thursday of the month at 6:30 p.m. in the Maria Parham Medical Center classroom. Meetings are open to guests and new members.  For reservation, call 252-438-6732.  The next regular meeting will be August 20. The scheduled speaker if Suzanne Keil, VGSS Coordinator of Grants & Research.